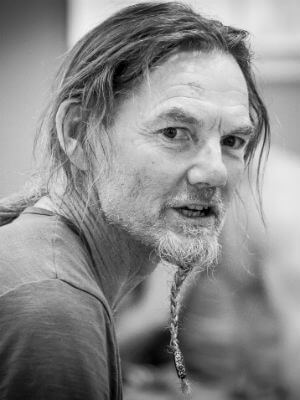 Be one of the first to hear about our many popular events when you join our community email list.

John was introduced to Ashtanga Vinyasa Yoga in 1987 by Derek Ireland 24 years ago while traveling through Europe. Two years later John began his studies with K Pattabhi Jois of Mysore India, and has since then continued to develop his practice and teach / share the practice with many other students on the path of yoga.

In 1995 John was certified to teach Ashtanga Yoga by Jois.  John incorporates design philosophies with yoga philosophies adding a very precise, detailed and colourful metaphorical presentation to his teaching.

His highly individual, analytical and sensitive approach touches deeply the students who work with him resulting in a strong following. John now mainly teaches assisted self practice development weeks with Lucy Crawford in Cornwall  and also teaches counted technique workshops around the world.

John travelled many times to Mysore. John’s teaching reputation is world-wide, presenting workshops internationally for the past 18 years. John, with Lucy Crawford, produced a best-selling book, “Ashtanga Yoga”, and a counted primary series DVD, and he is currently writing a informative books based on the counted method (suitable for all levels of practitioner).

John is also known for his illustrations/charts (line drawings) of Ashtanga Yoga Primary and Intermediate and Advanced Series, which continue to circulate Worldwide, having been published in chart form and then later in book form in “Astanga Yoga”, by Lino Miele.

John has also co-directed a highly successful 200hr teacher training programme over the last ten years, and with Lucy Crawford has helped to develop a community of highly skilled ashtanga yoga teachers who all share the ashtanga yoga assisted self practice method.

Why we love John

John Scott is the main reason SYL exists. He has been a consistent guide and support in the work we continue here at SYL. Both Scott Johnson and the late Ozge Karabiyik (the co-founders of SYL) became teachers because of the influence of John (and Lucy Crawford) and they both met on John and Lucy’s training in New Zealand in 2008. John has an incredible way of nurturing and inspiring you to go beyond yourself and his incredible experience and knowledge of the ashtanga yoga practice helps to really deepen your own personal experience and understanding of it.